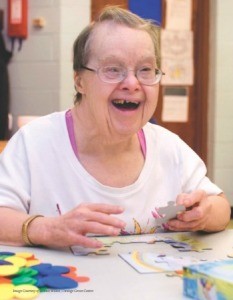 I came across an article from earlier this summer based upon a comment that a client made to me recently that I found very interesting.   Apparently, individuals with Down’s Syndrome have a very high rate of developing Alzheimer’s disease and they develop this much earlier than the general population.  According to the article, nearly 100% of individuals with Down’s Syndrome will display Alzheimer’s symptoms by age 60.   In my case, a client whose daughter has Down’s is displaying symptoms in her mid forties.    One of the reason why I found this interesting is that these cases show the intertwining of issues that face my more traditional long-term care planning clients (which are typically seniors in their 70’s, 80’s or older) and my special needs planning clients.  Both of these groups have some of the same issues- such as the need to have others make many of their decisions on their behalf, looking at receiving care in locations other than their homes, and general mortality issues.   But frequently the places where they receive care is much different, and while both groups are frequently benefitted by qualifying for public benefits such as Medicaid, the seniors are much more likely to have savings/investments in their own names than an individual whose disability issues have precluded them from having full time employment during their lifetime.   This requires looking at the issues facing the two groups in a different light when it comes to proper estate and asset protection planning.

But the crux of the article was how individuals with Down’s may ultimately prove very useful in developing treatments for Alzheimer’s.  This is because it is possible to use the population that has Down’s as a more effective trial group when testing medications.  They are a better group scientifically to run trials on then the general public because of the higher likelihood that they will develop Alzheimer’s than the general population.  If you ran a trial on 1000 otherwise healthy adults, you would normally have to factor in that there was a large portion of the trial that would not have contracted Alzheimer’s symptoms with or without any medications.  With a group of individuals that have Down’s, it is much easier to track the effectiveness of a medication vs. a placebo because almost everyone in that group will either have or will develop Alzheimer’s symptoms.  In fact, research on individuals with Down’s was a big part of the discovery of the presence and significance of amyloids, a protein that is now linked with Alzheimer’s.

Hopefully, this research will bring us closer to a cure or better treatments for the symptoms of Alzheimer’s.  At the same time, it should serve as a reminder for those who have individuals with special needs in their families the importance of good planning for their future, and the fact that individuals with special needs often have a multitude of health issues that can greatly affect their future needs and living conditions.  Proper estate planning can greatly reduce the financial and emotional burden of ensuring that your loved one will receive the care they need.

For special needs planning, please contact our St. Charles office for a consultation 636-486-9009.